Sexy New Windows 9 Photos Leaked All Over the Web [VIDEO]

Well, now that we’ve got your attention, it’s a good time to mention that leaked photos and a video of what may be Windows 9, currently called Threshold, have been leaked to the web. As the next entry in the Windows family of operating systems, it has been highly anticipated since the return of a Start menu was displayed in April 2014. Microsoft has a lot of ground to cover after Windows 8, but will Windows 9/Threshold deliver? 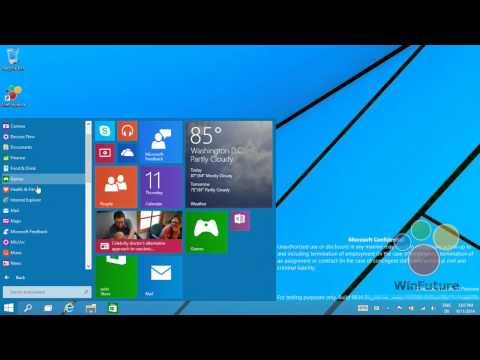 For fans of Microsoft’s beloved Windows operating systems, Windows 8 has brought a lot of controversies. Most users have a love or hate relationship with Windows 8. There are several things that contribute to this, but it is largely due to the absence of the staple Start menu and its Metro layout tailored to touch-screen devices. The Metro home screen also makes things difficult for desktop users. This isn’t to say that Windows 8 is bad, but different from the incredibly well-received Windows 7, which continues to increase in usage. As the folks at BGR put it:

The outcries from enraged Windows users have been heard, and the Start menu was brought back to Windows 8.1 and subsequent updates. However, in the leaked photos of Windows 9, it is shown as a full-fledged feature, and Windows users around the world can breathe a sigh of relief. Additionally, the return of the traditional taskbar can be seen to the right of the Start menu, including what looks like a Search function, and a virtual desktop feature.

In another screenshot, this feature is displayed as being able to switch between different desktops through a pane interface near the bottom of the screen, sort of how a smartphone can move between different screens. A Notifications function can be seen to the far right side of the taskbar, for updates and new applications in the Windows Store and other applications.

Aesthetically, the desktop screen is very pleasing, boasting smooth colors and graphics at all turns. In a way, it kind of looks like they took Windows 8 and gave it the desktop functionality of Windows 7. There are several icons for what appear to be Windows 8-style applications. Inside the Start menu are several Metro-style icons as well, including the Windows Store, Mail, News, Calendar, OneDrive, Skype, and more. The Charms bar, which was previously thought to be taken out in future Windows incarnations, is shown to still exist. However, the contents of the Charms bar are more readily accessible through the taskbar and Start menu.

It’s important to note that these details are subject to change as development of the new operating system continues. Later this month, on September 30th, Microsoft is suggesting that a public event will be held which showcases more of the new operating system’s features. However, Windows 9, or Threshold, isn’t due out until 2015, and plenty can change before then. So far, it’s looking interesting, and 4it couldn’t be more excited to see what the next generation of Windows operating systems brings to the technology industry.

What are your thoughts on Windows 9/Threshold, and what would you like to see in the new operating system? Let us know in the comments.